Use our email template to find an apartment FAST - increase your Craigslist email response rate by 500% or your money back.

This document gives you a proven email template to make finding a roommate or open room on Craigslist fast and easy…or your money back.

“My secret to moving turned out to be an awesome email template I found online. With it, I was able to get about seven responses for every 10 emails (yes, really).” - Daniel from Buffer.com

Using Craigslist to find a roommate and apartment was painful. Like root canal painful.

The average Craigslist advertisement for an apartment get’s over 300+ emails. Seriously. Isn’t that crazy? 300+ emails for an open room.

Here’s why I know:

When I moved to San Francisco, I thought it’d take a week to find a new apartment. Turns out I was way, wayyyy wrong. It took me 5 weeks of sending dozens of emails a day to Craigslist ads. I’d send around 20 to 30 emails a day and if I was lucky I’d hear back from one a day. 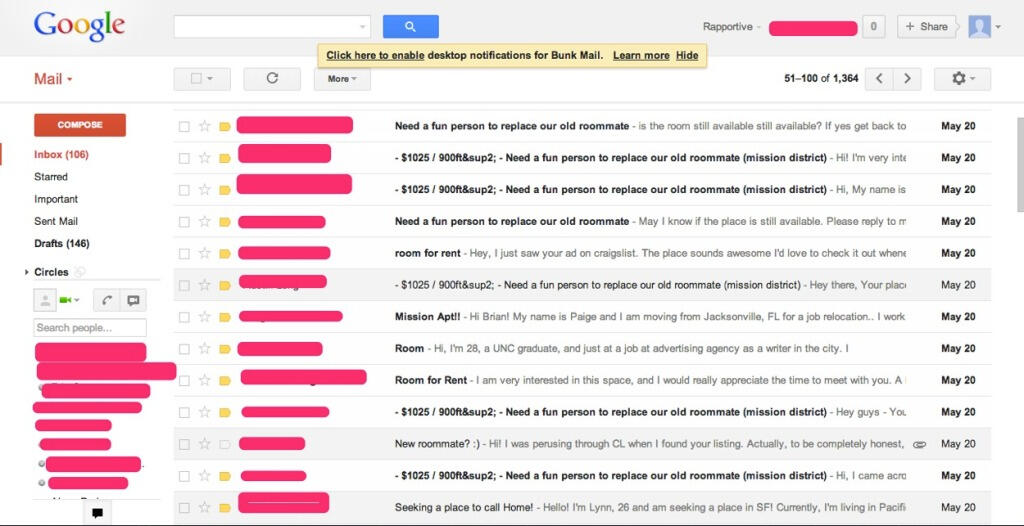 106 emails in 3 hours. After posting a Craigslist ad in San Francisco I received 300 emails in 2 days.

And then I started thinking…why is this whole Craigslist thing so hard?

That’s when I set up a little test. I created a fake listing to see what it was like to be on the other end of the housing process. Within just 24 hours my fake Craigslist post received 200+ responses. HOLY CRAP! This is crazy. Then I read the emails. That’s when I discovered why nobody was responding to my emails.

You see, I think I’m a pretty cool dude and great roommate. But after reading hundreds of emails from potential roommates for my fake apartment I realized I was making one big, gigantic mistake in my roommate email:

My email sounded and looked EXACTLY like 99% of all the other emails being sent to potential roommates.

Here’s a few lines I used:

I’m clean but not OCDI like to cook with friends and have a few drinks on the weekendI like going out but I won’t bring the party homeI love to explore the city and meet new people
As I scrolled through hundreds of emails I realized that 99% of the emails in my inbox contained AT LEAST one of the lines above. Aka I sounded EXACTLY like 100 other people who wanted that exact same apartment.

How on earth am I suppose to impress someone if I look like a total bore and completely unoriginal? I wanna look like a badass potential roommate, not a complete snorefest of a guy.

And then the solution to my Craigslist apartment troubles hit me like a freight train: PEOPLE ARE IGNORING MY EMAILS BECAUSE MY EMAILS SUCK, NOT BECAUSE I SUCK.

The secret to make people respond to your emails

Know this: your email most likely looks and sounds like 100’s of others applying for the exact same room. No one is responding to your email because it looks and sounds plain-as-vanilla to potential roommates…not because you suck or some black hole is preventing the email from going through.

And the worst part? Until you read our Craigslist Email Template, you’ll never realize just how bad your email is.

Because 99% of apartment seekers have no idea what they’re doing, they’ll literally spend WEEKS sending out the same ole’ crappy email over, and over again and missing out on all those apartments that sounded perfect for them.

After writing 100’s of successful Craigslist emails at $50 a pop for buddies, I’ve perfected the Craigslist email. And because I can’t possibly write emails for everyone, I’ve created a template that has a proven response rate over 70%.

What does that mean to you? Use our word-for-word email template and 7 out of 10 people will respond to you on Craigslist. It’s that simple.

Check out what one happy customer has to say:

What this template will teach you

This template will teach you how to write in a unique, fun way that makes your email stand out and helps you find an amazing roommate so you’ll only have to send a few emails before you meet potential roommates in real life. This email template will:

Show off your personalityTeach you the tricks of Craigslist (did you know you can only send 20 emails a day?)Explain the science behind copywriting and how to stick outGive you a step-by-step formula for creating an effective email that guarantees a responseGive you successful email that you can use word-for-word
Sound good?

When you purchase this you will receive a document that contains:

A proven email template that’ll get you noticed in people’s inboxesThe psychology behind writing a great email (in case you wanna make your own template).Tactics and tricks to using Craigslist to find a room
Once you have this template people will start responding to your Craigslist emails and will want to meet you in real life…AKA you’ll save weeks of time and thousands of dollar in the roommate hunt.

Oh, and BTW, if you’re saying to yourself, “$29 is a little too pricey” then think about this

Why does this email template work so well?

Before the internet, businesses sent letters to people’s homes to sell items like toasters, books, and other household goods. This was called the “direct mail” industry and it’s still around today (just check your mailbox). Back then, direct mail was the #1 way consumers bought goods (kinda like the internet today). Because of that, the direct mailers had to get people’s attention with the written word and make the consumer respond. Direct mailers spent literally billions of dollars running tests to find an exact formula that made people want to buy their product. The formula was so powerful and persuasive that direct marketers would sell a $100 product just by mailing a piece of paper with words to a stranger.

This document takes the research done by the direct mail industry for the past 100 years and boils it down to a simple, step-by-step formula specifically for finding an apartment. This Craigslist Email Template has been used successfully thousands of times. Stick out from the crowd and get yours NOW.

If this template does not get you at least 100% more responses then send me an email and I’ll give you a complete refund…no questions asked! It’s as simple as that. When the template works, we both win.

Made with ❤️ by Michael Folling